The Stade de Suisse in Bern is Switzerland’s national stadium and the second biggest all-seater sports venue in the country. 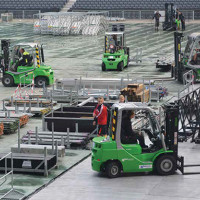 Aside from football, the stadium has seen acts such as One Direction, Bon Jovi and AC/DC perform to sold out crowds, earning it a reputation as one of Switzerland’s leading venues for sports, concerts, exhibitions and business events.

Material handling demands at the stadium are significant. Pitch covers, security fencing, promotional materials and food and drink all need to be transported around the ground before and after events. With the site hosting 25 football games a year and 30,000 or more people regularly there for events, material handling equipment needs to be accessible, reliable and efficient to ensure logistics run as smoothly as possible.

Before taking on CESAB equipment, staff had to lift and carry loads around the Stadium by hand and with only one forklift in use this was extremely time consuming. Head of logistics and infrastructure at the stadium, Mr M. Van der Tuin realised that materials could be handled better after he approached CESAB dealership Arbor AG for a replacement forklift when an existing truck broke down. Within three hours of his call, Arbor had delivered a replacement truck to the ground.

This fast response led to a conversation between Michiel Van der Tuin and Stefan Hofstetter at Arbor. Mr Hofstetter:

"When we got to know the team at the stadium, it became clear that their materials handling operation could be improved. They were using an old forklift with standard forks to transport the plastic rolls that cover the artificial turf on the pitch between events. We realised that these could be carried more easily with a bespoke attachment, so we helped them to develop a six metre rotating pipe to fit to the front of the new CESAB forklift."

The Stade de Suisse now has a CESAB M325 counterbalanced forklift, one CESAB P320 powered pallet truck, one CESAB S214 powered stacker truck and five CESAB CE230 hand pallet trucks in use. It also hires up to five extra CESAB forklifts when there is a big event or concert at the ground.

CESAB products are designed and manufactured in Europe using the ISO 14001 certified TPS*, widely regarded as one of the world’s best manufacturing systems.

Mr M. Van der Tuin: “The switch to CESAB has hugely improved our event logistics. The equipment enables our people to load and unload and transport all materials at minimal strain to themselves and in far less time. We now have a level of productivity, flexibility and reliability that was just not there before.

"Arbor and Cesab have helped to transform our event logistics. Our operation is simpler, more precise and more productive and the support from Arbor in terms of customer service, driver training and after sales care is fantastic."

This block is broken or missing. You may be missing content or you might need to enable the original module.